The new Deftones album is amazing. Go buy it. Good job, Shaun.
Posted by upstartfilmworks at 10:45 PM No comments:

Here's a scan of the Fangoria mention. Thanks to Barricade screenwriter/producer Ted Geoghegan for scanning it in and sending it to me.
Posted by upstartfilmworks at 10:40 PM No comments:

Well, another dream has come true.

My name is in the print version of Fangoria.

Awesome. Scan of the page is forthcoming.
Posted by upstartfilmworks at 10:56 PM No comments:

It' s been a while here, but not for lack of activity. I've just been hella busy lately.

First, I had to drive what I hope are the final nails in the coffin for my last project. We'll see where that goes...the producers now have what they want (the complete elements of the movie), and it looks like everyone on this side will get what they want (i.e. payment). Everything is going through escrow, so it will take a week or so. Involved parties will be getting an email with the next step. On a related note, the Project Manager function of Premiere Pro 2.0 is a huge lifesaver. It helped me reassemble and clean up a project that had become pretty unwieldy. It went from about 400 gigabytes to a svelte 70 G's. Nice.

Concurrently with the above, I also had to throw together some Closet Space packets and mini promo DVD's for the American Film Market. We just recently were able to have someone out there to promote and get the word out, so I had to do a rush job, but I think things turned out okay. Hopefully, we can get some sort of response out of that.

Closet Space's own FX guru Marcus Koch is planning his directorial debut next year, and I've been talking to him about coming on as a producer. I definitely have enough experience, but I've never just been a producer, so it should be nice if it all works out.

I've secured tickets for the wife and I to see Evil Dead: The Musical while we are in New York next month. I've heard good things about it, so I'm looking forward to that. This has become our semi-offical anniversary getaway. Evil Dead one day, Texas Is The Reason the next...how could it get any better?

Speaking of Texas Is The Reason, I just got lined up to do a phoner interview with Norman Brannon (nee Arenas) tomorrow for inclusion on the Space City Rock website. Look for that soon, hopefully between now and the date of the show. I'll also be writing up a review of the show for SCR afterwards.

Now that I've exorcized my computer, the Closet Space edit is kicking into overdrive. A new trailer should be out before Thanksgiving, along with our new (and official) poster design courtesy of Mr. Jason Beam. We're also getting our ducks in a row for the San Jose and Chicago Fangoria shows. It's going to be another busy holiday season for the House That Never Sleeps.

Posted by upstartfilmworks at 2:51 PM No comments:

For those of you that clicked over here from the Zombos Closet or Blogcritics interview - you might want to start further back if you want to read all the crazy production stories. I'm in post on Closet Space right now, so there aren't that many tales to tell...I'm sure when promotion, screenings, and distribution stuff starts to kick in it will get a little more exciting around here. For now, courage.

Here's a good place to start. That's around when we did our cast readings, conceptual designs, and set construction. We began shooting in May, shot heavily through June and July, and wrapped principal photography in August. You can use the monthly list on the right to click around, and note that the older entries are at the bottom of the pages.

I hadn't realized that there was so much to trudge through, as I really didn't expect to write all that much on this thing. It will make my snarky autobiography all the easier, though.
Posted by upstartfilmworks at 9:50 PM No comments:

Email ThisBlogThis!Share to TwitterShare to FacebookShare to Pinterest
Our first interview Q/A is up at:

Thanks to Zombo's Closet for conducting it.

Posted by upstartfilmworks at 7:54 AM No comments: 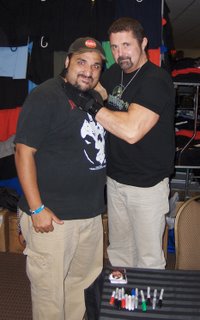 In honor of Friday the 13th, I give you Kane Hodder choking the crap out of me.

Third in a series.

Posted by upstartfilmworks at 1:03 PM No comments:

I've just about settled down from my whirlwind September, and am slowly getting into the editing groove again. Closet Space is looking good...so much so that I'm starting the process of setting up Closet Space 2 to shoot this time next year. My plan is to use the spring and summer of 2007 for pre-production and monster and F/X building. I've been talking with Jason about having a CS2 brainstorming weekend sometime soon, so I'm pretty sure I'll find myself in California in the next month or so. Our aim is to have a draft done by January.

This past weekend the wife and I took advantage of a Best Buy sale to pick up an 32" HDTV for my edit suite. I'm using it as an output monitor, so now I can really dissect picture and contrast during the CS editing process. My goal is to time things pretty dark...but without losing a whole mess of detail, much like...you guessed it...A Nightmare on Elm Street.

I'm also flying out to Tampa sometime soon to do some final 2nd Unit FX shooting for Closet Space - that will happen within the next month or so as well. Thank God I have a OnePass account.

The first weekend of my Screamworld security detail went by without a hitch, and I got the chance to scare the ever living shit out of quite a few people. It's the little things in life...
Posted by upstartfilmworks at 9:28 PM No comments:

Back from our crazy drive out to the Fangoria Weekend of Horrors...which came directly after my work on The Flesh Keeper...which resulted in my being sick for the last couple of days just from the sheer toll of all that on my body. It was all for a good cause though - the Flesh Keeper footage looks good, and Closet Space has already generated a grassroots buzz in the horror community. Now I just have to make sure I deliver with the edit.

The Weekend of Horrors trip was so successful that we are definitely doing it again for the California show in January, and more than likely the Chicago show in the spring of 2007...and probably a few after that as well. And yes, we will be bringing the door along whenever possible.

On a more personal note, I have successfully secured tickets to the Texas Is The Reason reunion show, so I'll be back in New York on Thanksgiving weekend. I'm really looking forward to that.

I also finally picked up my copy of the Infinifilm Nightmare On Elm Street DVD, and spent my day watching the movie, commentary, and all the extras. Damn, I love that film. I have to admit that a lot of the behind the scenes anecdotes reminded me of shooting Closet Space, which I guess has to be a good thing. If CS turns out to be even one-quarter as effective as NOES then I'll be happy.
Posted by upstartfilmworks at 9:56 PM No comments: