The Texas Is The Reason show was phenomenal. It shook me to my core, lifted me up, inspired me, recharged me in so many ways, etc. The best show I've ever seen in my life, period.

We also saw Evil Dead: The Musical, which was pretty damn entertaining. It took place in the coolest theatre space that I have ever seen.

Bad ass bands, support for the arts...yep, more reasons that I should have taken the chance and gone to college in New York. Ah, the folly of youth.

Here's a video from Saturday night's show. You can see my ever-bobbing head and "rock fist" in there a few times.

Texas is the Reason reunion live Back and to the Left

Add to My Profile More Videos

Posted by upstartfilmworks at 10:27 PM No comments:

3 weeks...man, I'm seriously slacking on this blog thing. I know you're all out there waiting to read the latest goings-on with baited breath. Some of you probably were hoping that I was dead. Not the case. Not yet, at least.

Hmmm...let's see if I can remember all that's transpired. First of all, Witchcraft 13 and all it's related issues are finally a thing of the past. Thankfully, that also means that I am done with all parties involved (both in front of, and behind the camera), and I am legally and (soon to be) financially free of that cinematic tarbaby.

By the way, I can say "tarbaby", because I'm Black.

Great big thanks are due to my cadre of lawyers, as well as the actors and crew that had my back throughout all this nonsense. You know who you are...because you were probably in Closet Space. Or you'll hopefully be in the sequel (ahem...Zoe, Lynn, Cesar...). If you are reading this and feel indignant, then you probably fall in the "thanks for nothing, and I hope you burn in Hell" category. Have a nice life.

So yeah, that movie is finally gone off the hard drives, so I had the latitude to start screwing around with Closet Space in a big way. I've gotten most of the assemble edits done for the bigger kills and setpieces, so the next step is to do a hand off to Visual Oddysee to start optical FX. I'm also still planning on trekking out to Tampa this month to get some more practical FX inserts done. I'm hoping to have a new trailer cut within the next couple of weeks, and I'll also be rolling out the new poster design.

Jonah made a quick trip through Houston to do a show, and we were finally able to talk about some collaborations. Look for at least one Jonah Matranga composition on the soundtrack to Closet Space. We also discussed some plans for next year that are pretty exciting, so I hope those come to fruition.

This weekend we checked out roughly half of the movies that were part of the After Dark Horror Fest. Some okay, some laborious...but The Grave Dancers was one of the best horror movies I've seen in a long while. Go see it if you can.

I'm going to try and get a lot more of the Closet Space assembly edit done before we go off this weekend for this: 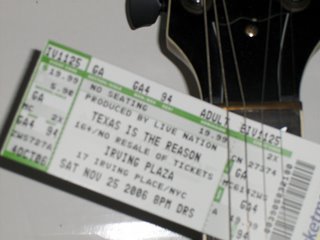 Posted by upstartfilmworks at 8:50 PM No comments: