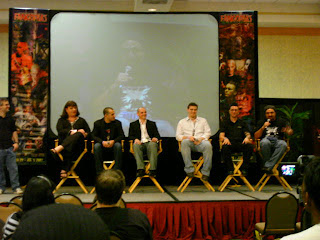 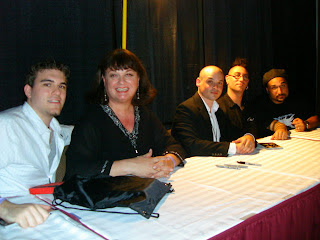 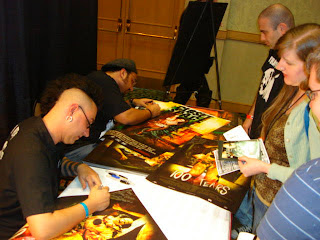 Marcus and I signing away. People actually were into it. Weird.
So yeah, the panel was awesome. Lots and lots and LOTS of people approached me over the weekend and complimented me on the movie, the trailer, and the stuff I said during the panel (even the cursing). Several of them were like "bro, I can tell you are going to do great things in horror just by seeing that trailer." I even had other filmmakers at the con mention the fact that there was huge buzz about Closet Space going around in the horror community. Of course, that's one of the most awesome things a burgeoning horror filmmaker can hear, so I thank them all and hopefully I won't let you down.
Friday night I got to hang with the extended 100 Tears/Barricade/Alan Rowe Kelly family and some Fangoria folks which was really nice. We all had a lot of fun eating steak and talking shit. I wish we could do that every weekend.
Saturday was more of the same - Melanie and Jason Stewart showed up, as well as Jason "The Unquiet Void" Wallach (whom we had never met up until then). He fit right in to the dysfunctional family, and we had a blast, busy though it was. Jason Stewart also sat in on a
Fearmakers panel with Joe Davison, Debbie Rochon, and Manoush, which was pretty cool. Of course, he managed to plug Closet Space as well.
I also had a chance to talk a lot with David Stagnari and Chris Garetano from
Horror Business, which was really really cool. David was someone who I really responded to upon seeing Horror Business, and Chris is equally cool to talk with. I look forward to whatever both of these guys have up their sleeves.
The most surreal moment had to be when Harry "ki ki ma ma" Manfredini came up to me and complimented me on Closet Space, and my panel appearances at Fango and Texas Frightmare Weekend. I mean, this guy FUCKING SCORED FRIDAY THE 13TH for Christ's sakes. I'm still kind of wigged out by that one.
Dinner again with the gang on Saturday night, then back to the hotel for the drunken debauchery/starfucking/empty conversation with your too-drunk friends that takes place every Saturday night at every one of these shows. This is where I check out, pretty much, 'cause it ain't my thing. I even tend to avoid the VIP parties because they seem like kind of a joke to me for all those reasons I just mentioned. Plus, I'm usually tired from actually, you know...WORKING during the day at these shows. It's draining. Even when we did go into the VIP party, I ended up talking to David Stagnari for most of the evening...which is what I was doing in the lobby BEFORE I went into the party. Melanie and I actually ended up hanging out with Michael Gingold for a while and just bullshitting, which was great. Jason and I did the same on Friday night with Mike, and I look forward to more horror bullshit sessions in the future with him. He's a really cool guy, and not just because he's the managing editor of Fangoria.
So, Sunday comes, I make the drive through the Lincoln and Midtown tunnels to take Melanie to LaGuardia, come back to the con for a bit to see the exclusive footage for The Third Mother (not that impressed, sorry, although Coralina Cataldi-Tassoni is an awesome person), and then say my goodbyes and pack up and leave. And here I am now, burned out but satisfied. I'm glad this is the last show for a while, because part of this whole convention thing really wears me down. And it ain't cheap, either.
Now I just have to start pre-production for Jonah's video shoot, which we start on the 18th or so. No rest for the wicked.
Posted by upstartfilmworks at 12:32 AM

Hi I'm Phil Woodward from Houston, Tx. My buddy Morgan(actress,artist) says you need zombie extras for your new slasher flick. I'm a drummer in a local rock band and I have some stage experience so if ya need me let me know. Philsmash@yahoo.com
713 560 2193
713 520 8515

You should always read the fine print before opting for a trailer rental service to avoid being surprised by certain "fees".